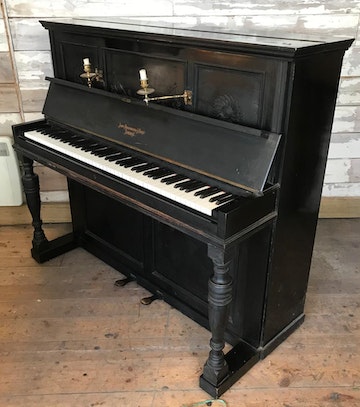 Founded in 1728 by Burkat Shudi, the firm was continued after his death in 1773 by John Broadwood, a Scottish cabinetmaker who had worked for Shudi and married his daughter. Originally harpsichord makers, popularity of this instrument declined and the company soon focused solely on piano manufacture, constantly innovating and evolving the instrument. When John's third son became a partner, the company became known as John Broadwood & Sons Ltd. Broadwood pianos have been accepted by every reigning British monarch and the company still holds a royal warrant for the manufacture and tuning of pianos. As well as royalty and nobility, many famous pianists have endorsed the Broadwood name - Chopin himself played Broadwoods when in Britain.

We see many Broadwoods in the workshop, frequently beautiful working antique uprights and grands from the 19th or even 18th centuries, as well as 1930s examples which can very often be brought back to their excellent original standards. Often family heirlooms, these pianos are cherished by their current custodians. Our most recent restoration of a Broadwood grand returned in style to its elegant Exmouth home in February 2021 and we usually have more than one Broadwood piano awaiting restoration at any given time - an enduring legacy for a company founded nearly three centuries ago!