Find out more about this classic English make 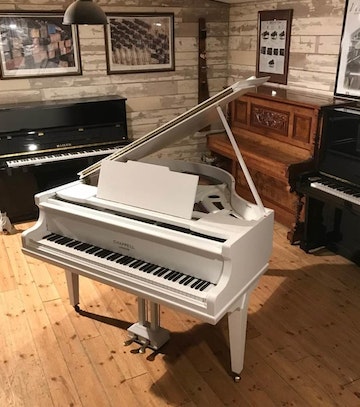 Chappell & Co. was established in London in 1811 by partners in a publishing business; the company quickly became popular for music publishing, with Beethoven himself recommending them in a letter. They began selling pianos in their shop and began building their own pianos in 1840. Production of pianos increased in the very early twentieth century and during the 1920s, Chappell purchased several highly regarded English piano manufacturing firms, including Allison & Co., Collard & Collard and John Strohmenger & Sons. Chappell pianos were produced by The Kemble Piano Company of London until the year 2000.

We regularly see Chappell pianos, generally uprights from the 1920s or 30s; the majority are eminently suitable for refurbishment followed by generations of further use. Many people are keen to buy British made items where possible and Chappell & Co. is a name that many are familiar with. We frequently have Chappell or similar British pianos in stock or coming through the workshop and are able to source and restore to order if required.