More about this globally renowned brand 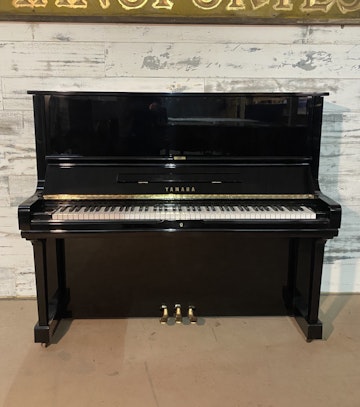 Yamaha pianos are a globally renowned brand which can be heard in concert halls, recording studios, places of worship and educational institutions and grace millions of homes worldwide.

The iconic logo which many recognise from the motorbikes features two tuning forks representing the musical history of the company: the first piano to be made in Japan was an upright built in 1900 by Torakusu Yamaha, and two years later the factory built its first grand piano. Russian maestro Sviatoslav Richter played a CF in January 1969 at a concert in Italy, and chose to play one again later that year at the Menton Music Festival in France, after testing several different manufacturers' pianos during rehearsal. Richter played and praised Yamaha pianos from that point forward, cementing a relationship with the company that lasted for the rest of his life.

As more European music festivals adopted the CF as their official piano, numerous legendary pianists began, and continue, their patronage of Yamaha pianos.

Yamaha also created a new kind of piano in the 1980s with the Disklavier, an acoustic piano fitted with electronic controls for recording and playback. The range has updated and refined as technology has evolved since; the seventh iteration, the ENSPIRE was released in 2016, the Disklavier’s 30th anniversary.